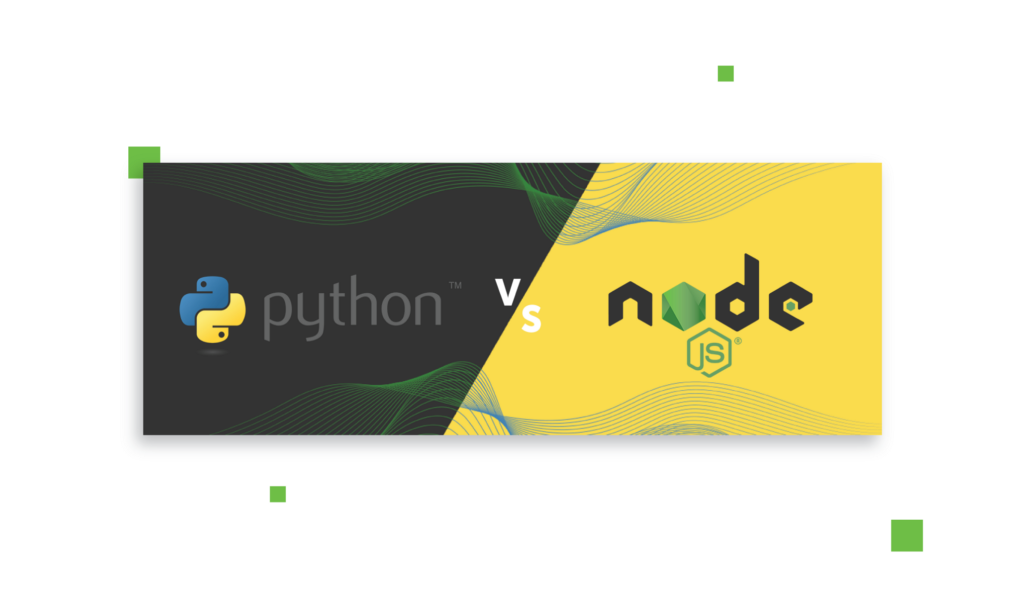 You must choose the right programming language as per your need and specification as every programming language has their own sets of pros and cons . While comparing Node.JS and Python , choosing the one among two is the main problem which can be address by right application developer.

In this blog we are going to differentiate between Node.JS and Python on the basis of upsides and downsides of the two , and then suggesting you to select the best that fits for you .

You can get plenty of recommendation from your techie friends , developers and other people for choosing the technology , but you won’t know which option is best suited for you ?

Every tech framework and programming language has been developed to meet some particular needs of project . So don’t try to choose the technology just because it is popular one . You should choose the one on the basis of these factors :

These can be various other factors , but you should take each feature of your project details into consideration during selection of technology for app development . While this article is limited to choosing between Python and Node.JS for backend development , we will restrict our discussion for this only and thereon benefits arising out of it .

Before discussing any further , let us explain why we are actually comparing . Python is programming language while Node.JS is not . When tasing about Python it is Javascript , while on th other hand for Javascript , Node.JS is runtime language .

The basis differentiation you can say between Python and Node.JS is they both use similar language for both backend and front end while you are writhing in Node.JS. Now lets have a detailed discussion between the two .

Node.JS is faster in performance while comparing with Python as Javascript code in Node.JS in interpreted in V8 engine . Node.JS used the code outside website browser .

This as a result will ought to give better performance and will be called as more resource efficient . This at the same time allows you to utilise features that you are even not allowed to use in browser for instance say TCP sockets .

Node.JS also facilitates non-blocking event-driven architecture that is capable of handling many request at a time , which increase the overall speed of code application . Another major benefit being it has single module catching enabled which eliminates app loading time and make web app more responsive .

Although both Javascript and Python both are slower in comparison with compiled languages live Java as they are interpreted languages . However Python is in comparison gives slower performance as request in this is more slowly processed .

Do not choose Python if you are willing to build application that are aiming at higher performance and speed and is involved in performing complex calculations .

You might be willing to attract lots of users to use your app without any hinderance . That is what scalability is all about . Scalability is concern about app’s ability to assist large number of people with absolutely no errors in performance .

Python does not support asynchronous programming , but contains some tools which provides scalability accomplishment .

Since Node.JS offers higher scalability , it wins in this race .

Node.JS facilities  asynchronous input and output due to its event driven environment . This procedure starts as soon as any event happens and that is the reason no procedure can hinder the thread . Thereby it is preferable for building web games and chat apps .

Python has been designed in different manner . Python is being used for developing event-driven and asynchronous apps by using specific tools . Modules like asyncio helps in writing asynchronous codes in Python . However asyncio has not been created specifically in Python and hence extra hands on these is required .

If you are good friend of Javascript , then tan tana !! , you can easily learn Node.JS framework . It is because of its easy learning process , Node.JS is on top most position in the list of most famous framework and acquires 49 % of the share .

Python as we all know is not as popular as Node.JS is , and hence its syntax is unknown to python developers .

However it offers cleaner code writing and developer actually don’t have to write lot of code lines . In Python , some code lines can aid you reach similar outcomes as in Node.JS .

In addition to above , Python is old language which also facilities tons of documents sufficient for any developer to learn .

As per stack overflow , Python is most preferred language . Full stack developers prefers using this simple language for app development .

So conclusion is Python is easier to learn in comparison with Node.JS .

The Syntax of Node.JS is similar to Javascript and hence if you are familiar with javascript , you are not likely to face any hurdles with Node.JS

The syntax of Python is very easy to learn and at the same time is also free of curly bracket also . That is the reason why code is easier to debug and read . If you are a software techies , then python code is very much easier to learn and understand .

As a conclusion , Python wins in this case .

Web app development companies generally do not prefer to use this javascript framework for large projects as it lacks clear coding standards . But yes small project can be well developed using this framework .

Python can be well used in wide range of project that may involve numerical computations , web application , to network programming and machine learning . It is known to be perfect programming language to perform various tasks .

Python also facilitates different frameworks that can be used in building backend like Pyramids , Flask and Django . In addition to it , it also consist of frameworks for frontend such as PySide or Tkinter .

It is easily customisable and integrated with different tools available in marketplace . It can be extend using built in APIs for building DNS ad HTTP server . It can also be easily integrated with Babel which can help you in frontend development .

Log.io is proven useful in error fixation and project monitoring , which tools like Jasmine is being used in unit testing . In case you want to do module building , process management and data migrations , you can easily use Webpack , PM2 and Migrat .

Many Python frameworks is available in marketplace . You can even integrate Python with Sublime Text editor that also provides some extra syntax extension and editing feature .

Python is known to be Robot framework for performance of test automation . Some of the web development frameworks are CherryPy , Web2Py , Pyramid , Flask and Django .

As a conclusion both Python and Node.JS are extensible easily .

In general , errors are always part of development process , and therefore transparency and feasibility is identification of error is what all is required in programming . Node.JS is efficient in error handling which may arise at time of coding the applications .

Python takes less time than even Node.JS in finding errors and bugs . And hence you will surely not waste your time in error rectification in both Node.JS and Python for your web app development .

NPM , the Node Package Manager is accountable for handling packages and libraries in Node.JS . It has large inventories of software libraries . NPM at the same time is very easy to learn for  developers  with proper documentation .

Therefore both Python and Node.JS wins in case of libraries .

This is known to be best available framework to build run-tine-intensive apps . For instance you can easily use this technology to build chat functionality in app . Node.JS development companies build apps which can manage data steaming , queued points and proxy efficiently .

Due to its lower run time performance , it can not be used for real-time apps development . We also do not recommend to use Python for memory-intensive apps .

Thereby , Node.JS wins in this scenario .

Node.JS is widely being used for backend coding of web apps . However you can also make use of Javascript for front end development . Node.JS is being used for building web apps , hybrid apps , desktop apps as well as IoT and Cloud solutions .

The best part is this cross platform framework aids developer in coding single desktop app which can be used on Mac , Linux and Windows , which in turns helps in lower cost for overall projects .

Due to its full stack nature , it is being used for both frontend and backend development . You can also run Python program as it is cross platform like Node.JS .

Both Mac and Linux have Python previously being installed , but on Windows , you have to actually install Python interpreter by your own . Python is know to give best performance on both desktop and  web development , but at the same time is not recommended for mobile computing .

That is the reason Python is not being used in mobile apps development , but its demand in AI and IoT solutions is increasing day by day .

Therefore more Python and Node.JS is similar in terms of universality .

Node.JS has large number of community developers who are active on community . Since this is old language , developers from all over the world are used to of using this technology

Python is known to be more mature than Node.JS and is open source as well . Its user community has very large number of contributors with expertise levels of experience .

As a conclusion , both Node.JS and Python has large communities .

It impossible to state which programming language to use and which one is better . Every one of them has their own advantage and disadvantage and language selection depends on the type of project you are looking to built and then take the decision in appropriate manner .