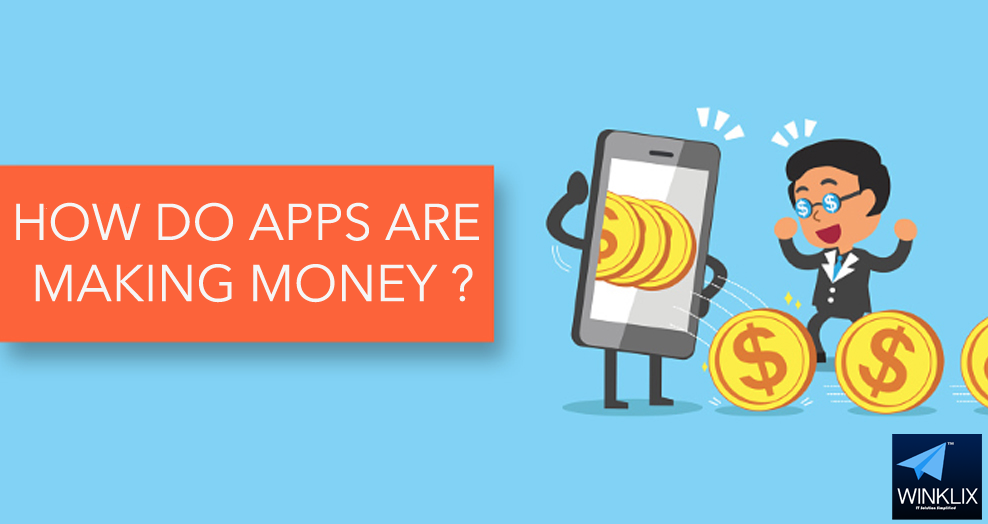 Billions of dollars can be earned from app industry . But making money from app means you have to develop the app that really makes money , and not the one which can not make the money at all .We are here to tell to what kind of app you can make to press billions by giving you some awesome ideas.

A mobile markets has been seen with tremendous growth over years , and is expected to continue growth over years . According to recent studies , about 80 % of the user who are earlier using desktop version has now switched to smartphones .With such a huge change , every entrepreneur is just trying to grab a piece of gold in market flooded with app .

If you are just born in app market , or you are having really cool ideas for an app , the very first question arises in mind is how to make it profitable , after investing your precious time and money for the same .

Our app development company WINKLIX has professionals who can help you determine how to earn money from app , and how much in reality can it potentially make .

WHICH PLATFORM IS REALLY MAKING MOST MONEY FOR APP DEVELOPERS

WHAT KIND OF REVENUE DO APP GENERATE ?

The fact can not be denied that apps are big big business now . In 2016 , global app revenue hit an estimate of $ 54 billion . This was $ 10 billion increase when compared with 2015 . By calculation and prediction app revenue may go upto $ 6.3 billion by 2022 .
Gaming apps are making the most out of it , by contributing more than 60 % revenue .Mostly in app purchases are main source of income , although most of the games are free to download .For instance King’s Digital Company , the agency behind candy crush earns $ 1.6 billion daily through in-app purchases .

HOW MUCH DO SUBSCRIPTION APP MAKES ?

With over 1 million active members , Tinder’s is a great example of app that is tidy money earned due to in-app purchases . Tinder app is free dating app , but makes money for additional features , which influence user endless opportunities to match . Tinder location filter allows user to match user location and connect accordingly . Tinder charges approx $ 9.99 monthly for tinder plus and nearly $ 14.99 for tinder gold .

APPS ARE NOT JUST FOR MOBILE PHONES

Apps have now spread their branches out from cellular phones only , as more integrated smart device have entered the market . Smart TV’s are nearly contributing 34% of the internet users in 2017 reports .So now apps should be primarily focused on smartphones , but as a secondary part they should also be developed for smart TV’s and tablets .Expansion of platform not only offering increase exposure for your app , but also opens new revenue streams .

WHAT’S THE NEXT BIG THING FOR APP DEVELOPMENT ?

As we have seen plenty of endless opportunities for fortune in the app , app market has shown substantial growth in first conception and it shows no sign of slowing down .The instruction of Xbox app stores , Smart Tv’s and large tablets are also contributing the large chunks of it .So in case you want to press millions of dollars , you must focus on all the platforms .
Winklix.com is leading mobile app developer in Delhi and Mumbai , India having experience of creating 500+  website and app . Contact us now

One Reply to “How Much Money Is Expected To Be Earned With An App ?”