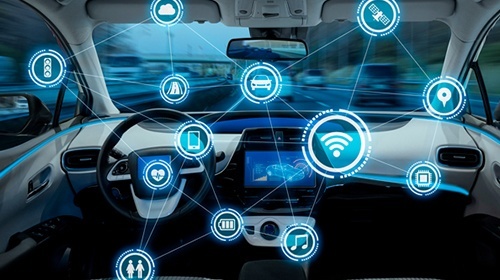 The Internet of Things is a technology that is making a buzz in every possible form it can . The IoT that we see in present world is just the glimpse of the technology , and there is lot more to come in near future . Automobile is one of those industry that has adopted IoT to discover many aspects from it . So the million dollar question arises here is what are the infinite possibilities with this technology and what can we expect in the near future ?

The Automobile-IoT In The Past

There are various automated and semi automated features that exists for over a decades in automobile industry . For instance , the GPS system that we use was introduced in late 60’s by General Motors – American Automotive Giant for its driver aid programme that was similar to the concept of modern GPS system , but was based on ground based infrared system rather than modern satellite system, .
Later in 90’s General Motors in association with OnStar was successfully able to implement navigation system in CDMA phone , which has now become an obsolete one .

The Smart Cars Of Today

From the age of using circuits to going digital in present world , drastic change has been seen . 21st century has aid us in seeing the technologies that we have only thought of . Navigation  , Cab Services , Entertainment are just some of the aspects of the modern technology in car . There has been endless possibilities once the software application have started connecting with mobile devices . It is the outcome of the technology war for the things with which we are living today , and the war is still going on to discover endless possibilities . The self driven car that no one have either think of has been bought into life in distant future and its creditability is improving day by day .
Automotive industry has got boost and the result of which is automated features and better access .

There are few self driven cars available today like Google’s Waymo , Tesla cars and more . Tesla cars has recently announced that all its cars will be self driven which we can say is a huge step towards a house of automated products .

Many More Things Yet To Be Discovered

IoT has just taken its first step in the technology market , and it has to driven millions of kilometre ahead to harness its full functionality . The things done so far is remarkable and will help in creating more things in future . But this is the known fact that idea of self driven car will take over decades to come into effect in reality . IT industry is trying hard to build something great in near future .
In case you are looking for IoT app developer , you can right away contact Winklix .

The Internet of things (IoT) has revolutionised the world in lot of ways. This drift is responsible for offering so many innovations across various sectors. From the simplest fitness trackers to the fully automated systems for cars and homes, Internet of things has truly impacted the lives of people. It has a very complex network which is connected to the web server for the proper functioning.

In a nutshell, IoT is the technology of connecting a device to the internet (which has an ON/OFF switch) and to the other connected device. It is an enormous network where users can share and collect the data around them. The devices have in-built sensors which are connected to the IoT platform which integrates all the information and applies analytics to meet user specific needs.

Its application ranges from microwaves which cook food automatically to the self-driving cars which have in-built sensors to detect the objects in the path. The information is taken up by the sensors and with the ability of advance analytic power, the devices can make smart decisions based on real-time information helping users to save money and time.

There has been a real upsurge of this technology. Huge volumes of access requests are handled by the hosting companies and their servers. This has opened new opportunities and challenges by significantly changing the web hosting world. All the entrepreneurs and businessmen understand the pros and benefits of Internet of Things. The two main factors that are responsible for the cloud growth are big data and IoT. By 2020, the total traffic using cloud technologies will reach around 14 zettabytes. This upsurge is basically due to the improved cloud infrastructure.

Why turn to cloud?

Traditional data centers cannot support multiple workload. But with the rise of cloud, start-ups and businesses are turning to cloud because it can support huge dataload. This is a golden opportunity for the businesses that are looking to invest and enhance their analytical power. The Big data and IoT have observed a sharp growth in the business sector because these technologies handle 1/3rd of the cloud workload. It is expected, its market will grow exponentially leaving behind market of laptops, tablets etc. Most of the revenue is generated through sale of hardware in the IoT sector. In 2019, it is expected that the government sector will become the leading sector for the IoT devices.

Many businesses are moving their business on the cloud. So it is high probability that the companies will be investing more on IOT. Cloud is a pathway to access and achieve IoT and Big Data analysis.

IoT has a huge market and according to a research, the global market will continue to grow in future. It is believed that huge amount of revenue will be generated as the developing nations are adopting the cloud technology into their business.

The larger market of the cloud is owned by large companies like Google and Amazon. However, small start-ups will continue to implement IoT in the cloud which will result in the launch of new devices triggering more innovations and growth in IoT sector.

Target advertising is rising day by day. As the big companies are not investing much in the advertisement, IoT is opening a whole new way to targeted advertising.

The cloud computing and IoT are interlinked with each other. So growth in one sector will directly have an impact on the other. If IoT rises, then there will be a growth in the cloud market. IoT has a big future ahead which will drive the cloud growth in the business.

So in case you are looking  for IOT app developer , you can right away contact us . 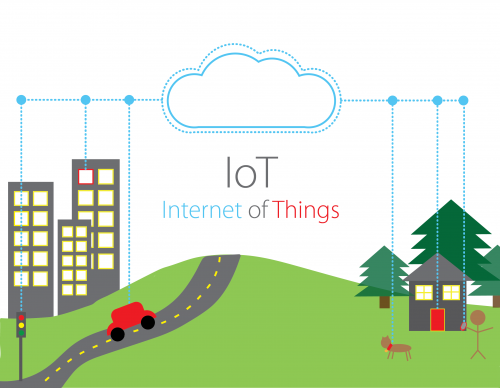 Internet of Things is emerging at a very rapid rate. This sharp rise is due to the high demand of devices which can do our daily chores making them very convenient. Isn’t it fascinating how the Internet of Things empowers the devices to interact with the humans? Indeed it is… There is a huge change in the development of Internet of Things technology. Let us try to understand these with the help of 5 very important questions. These are as follows:

What are the most fascinating uses about Internet of Things?

Another fascinating thing which IoT has enabled us to achieve is the saving of light and heat energy. In working offices, there is wastage of these important energies. But with the help of Internet of Things, each appliance like light bulbs is connected to motion sensors. So if there are less people in the office, you would see them start one by one when people walk under them and they get switched off when people walk away from them.

Similarly on the roads, there are road lights which gets turned on as soon as a vehicle approaches the street light and gets switched off when it passes away. This is how you can save lot of light and heat energy with the help of Internet of Things.

What is the biggest risk involved with Internet of Things?

The largest risk involved with the Internet of Things is the security. We all are excited about the driverless cars. But what if someone corrupts the programming or if there is human error in the programming of a car, then in a rush hour, it will lead to several accidents. This will be disaster as far as the security is concerned. We talked about the turning of street lights when a vehicle passes by but what if it does not turn on in the night causing difficulties for the driver to drive the vehicle. This may lead to accident. So, security will always be a concern as far as IoT is concerned.

What are the biggest challenges that would impact Internet of Things?

Interoperability is one of the major challenges that Internet of Things is facing right now. What is interoperability? It is the ability of the machines to make use of the information provided by the user and offer the services. It is the ability to communicate with different vendors. So, IoT must be able to work and communicate with the different devices. Every device has different working standards. So it is big challenge for the IoT to incorporate with these devices.

Shortage of energy is another huge concern as far the Internet of Things is concerned. We need tremendous amount of energy to power up the billions of IoT devices.

What will enhance and accelerate the Internet of Things?

What are the key advices for a business interested in the IoT?

The business must look for the answers of some questions before implementing Internet of Things into your business. Questions like what is the vision of business? What is the strategy? How is your vision different from the others? More often than not some businesses run away from the problems. They jump from one technology to other. But instead of changing the technology, businesses must focus on the solutions provided by the Internet of Things. You must clear your mind and think properly for the solution. That is how the business can make revenues by making the maximum of the internet of Things.