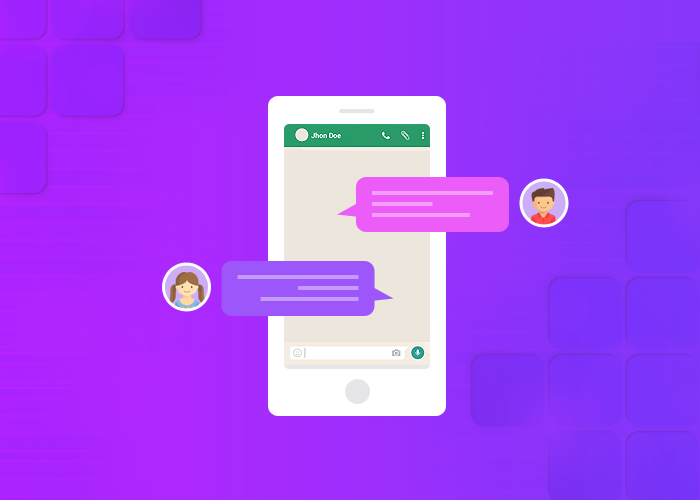 Have you ever wondered how  to develop real time messaging app like WhatsApp ? The messaging world has changes so much in last few years . Gone are days when we use text SMS for communicating over chat with person . In fact messaging world has been revolutionised by introduction of emojional in messaging .
Similar in present COVID times , business firms potential totally depends on employee management and workplace communication , specially when everyone is working from home . In similar way effective communication with your business clients is also one of the imperative things to consider . Hence either now or in future , companies have to understand the important of tools for communicating within as well as outside the organisation .
In order to quickly tackle with this situation is to create real time chat feature so that each piece of information can instantly get handy with users . Apart from it , you must partner with software development company , who can help you with integration of chat functionality is your already published app or develop an app right from scratch just like Slack .
Also Read : How To Work Remotely For The First Time Due To Pandemic
If you are all set to create your instant messaging app , then we at Winklix has something technically advanced waiting for you . But before we deliver the robust solution to you , let’s explore the secret behind making successful mobile app . You must ask there questionnaires before starting :

Also as per statista , in terms of numbers of mobile phones messaging apps worldwide , it is expected to grow to three billion by 2022 .

As per another report of Statista , in July 2019 , WhatsApp was leading mobile messenger app globally .

Undoubtedly , as per the above stats , you can see the drift in marketing of messaging apps . Hence it is good idea to hire mobile app developer to create your own app in short span of time .
It does not matter how many messaging apps are present in marketplace , as they are going to cost you on monthly per user basis . For instance say Slack cost $ 8 per month per active users . In addition to it , data security is always a major concern specially when you are dealing in finance sector . This raise a demand for custom message app development .

Irrespective of content and context in messaging apps , all messaging apps bits of information right from one user to another on real time basis . Therefore this is the main functionality of messaging apps that you should always pay attention .

As and now , you might be hearing about security breaches . In messaging app , when person are communicating on real time , it is very much important to carry on the same in secured environment keeping in mind the unparalleled level of security .

This feature facilitate users to see whether their message has been reached and seen by user or not .

This features notifies users for messages which are unsend from their end .

Group chat option is required to send messages to groups and communities at one go . It can also be used for discussion with certain people at once for some specific matters .

In some circumstances , users does not feel like typing for longer text messages  . Rather they prefer to call over voice or video or send audio message to users . So for facilitating user with extra layer of convenience , you must facilitate audio and video call as well . With the right app developer in India , you can easily implement this functionality in your chat app .

The Lines Of Code

Code selection for development of messaging apps are real key to success .
When it comes to mobile app development , the very first question that may arise in mobile app developers mind is which language to use for server side implementation ? It should be chosen with utmost care as it will be acting as a backbone for app reliability , scalability and it is the one which will be handling millions of connection per node .
ErLang and GoLang are the two who have proven themselves reliables and efficient for messaging app development .
Erlang – You will be excited to know that most used WhatsApp is developed using Erlang . Erlang was written inn early 1990’s specifically for telecommunications equipment and supported design with its concurrency . But Erlang is not so popular language , hence lines of codes is not everyone hands job . Thereby choosing the right talent is important to develop your app on this technology .
Golang – Golang is backend language developed by Google which is very simple to code with ultra fast speed that can even be compiled with native code . It addition to it , it also supports concurrency by design and has garbage collector as well .
Concurrency model of both Erlang and Golang are inspired by CSP (Communicating Sequential Process) .
In comparison between both , undoubtedly golang has large array of open source projects , and thereby you can easily find Golang developer which comprising it with Erlang .

Haven’t heard about this terms ? Don’t worry . In order to develop your own messaging apps , you actually need to choose your communication protocol .
We can define communication parameter as set of rules and guidelines which facilitates real time exchange of data between two or more devices at the same time . It provider a way to seamless make connection even in low latency for connection making between two or more participants .
Don’t try to skip this , as messaging app development is not possible without this parameters . Some of the definitive protocols of this are :
WebSockets
If you are from technical background , you might have heard of the term web sockets . This is one of the safest and modern platform facilitating bi-directional data exchange between clients and server .
At the time when connection is established , server and client both can exchange data without any additional request from client side . As soon as data arrives to server , client will receive data . As there may be case that numerous of users can be connected at same time , web socket are capable enough to send messages in faster way and at the same time consumes less traffic while comparing it with other competitive protocols that you might have heard of .
MQTT ( Message Queuing Telemetry Transport )Choosing this can be a worthwhile choice for exchanging of data between clients and servers . MQTT also holds ability to connect with IoT devices . It offers safe connection over TLS with support of TCP/IP .
XMPP ( Extensible Messaging Presence Protocol ) Is is one of the delegated XML protocol for time communication . It is very much scalable as per demand and has been designed specifically for real-time messaging with efficient push mechanism .
It is very much secured and safe as it uses SASL . In addition to it , mobile app development company can work on end to end encryption to make it more secured . As it is decentralised in nature , anyone can easily make their own XMPP server .
However when there are pros , there are cons as well . It is quite complex to implement . It also does not offer message delivery confirmation which is now a days one of the essential feature . So as far as from developer point of view they need to handle it manually .
Restoring Chat History In general there are two approaches when it comes to restoring of chat history :

Storing of data in the cloud will provide extra layer of functionality for users to retrieve chat from cloud when switching between devices but at the same time will cost you additionally on your server side . On the other hand , you can also contact software development company who can aid you with storing of chat history in users Google Drive account . But Google Drive only has capability of storing text message only .

After closing with communication protocols and backend finalisation , we can move towards final closure . We have discovered some features from our own personal search which can help you to make strong presence in respect of your competitors like WhatsApp and WeChat .

Chatbots can be integrated within the app . They have certain predefined sets of questions and answers for business as well as individual account , which can facilitate user to do search , transfer funds , send common messages and so on .

Still there is a room for some great messaging apps which is yet to come . Don’t wait , rather make an next generation communication app by hiring top mobile app development company .